Last week, we had a blackberry winter. In Western NC, that’s a cold snap that threatens the blackberry flowers.  Two firefighters I know got hypothermia as they rescued a hiker with a broken ankle only two miles away from the fire truck.  It hailed on them.

I did and framed this picture of the mouth of the Swannanoa River.  The frame is handmade by Mark Henry of Weaverville, NC, who is an excellent painter, too.

I’m proud to continue the centuries-old practice of drawing from plaster casts in my studio.

Student work; shall update as she progresses:

Virginians (and I’m one) used to be told that Virginia history began when Walter Raleigh bought a new cloak for an audience with Queen Elizabeth I.  Virginia almost didn’t happen because when Raleigh saw the Queen about to step into a puddle, he spread his coat before her.  When she later chastised him for showing up under-dressed, a witness to Raleigh’s gallantry spoke up on his behalf, and Raleigh goth three ships by way of thanks.

Virginians don’t learn that anymore, and North Carolinians never did.  To be propagated, history requires a certain density. In an effort to thicken up the past, note the following photo and two studies, done off Okisko Road in Pasquotank County, NC:

I know Virginia claims the first representative assembly (the House of Burgesses, 1619), but look who commemorated the birth of North Carolinian self-government.  That’s right, the Sir Walter Raleigh Chapter of Daughters of the Revolution.

Such self-confidence is inspiring. And it lasted longer than people think.  Two hundred yards from this marker sits this house, whose front porch in the Federal style is an example of the high tide of American architecture  that washed over even our distant countryside from 1750 until about 1830.  I got two studies of it–one in walnut ink and one in oil–and I intend to revisit it this spring and summer and make a large format work. 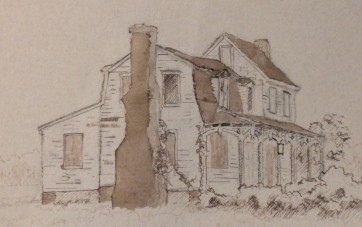 Like the Elliott barn and stable in my masthead, this home deserves to be known. 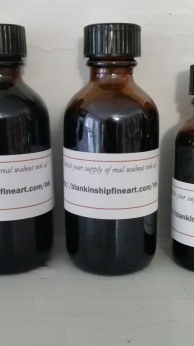 Visit me at # 249 in Riverview Station today from 4 til 8pm, as well as three dozen of my neighbors.  Christmas is coming; support locals who make things with skill, and honor your loved ones with gifts of real beauty.

When you get right down to it, you’d rather be eating ginger snaps while I sell you a handmade walnut ink drawing than fight for parking at Wal Mart.

Before the leaves turn in Western North Carolina there is a solid month of foggy mornings. Sometimes these persist after the leaves fall. Here you can see trees in various states of undress as the as the fog reveals them and their reflections in the French Broad River in the mountains outside Asheville.  This drawing will be available at Of Time and the River, the third annual art show to benefit RiverLink, held this year at Zealandia, overlooking downtown Asheville.

I’ve spent a year describing space in my drawings without the use of a brush. Exclusive reliance on pens means a variety of pens.  The drawing above was executed with goose and vulture quills and Japanese manga nibs.

Heavy pen use also means trying for an expressive line. There is a lot to be learned from using line to turn form in the portrayal of small objects in the foreground.  We’ve all seen apples on a tabletop rendered with close-hatched latitude lines.  I’m trying to build on the skills involved in so doing to depict aerial perspective with the use of line.

Inspiration for this way of working has come from nineteenth century etchings by people like Whistler and Hayden.  Many thanks to Julyan Davis, who steered me to some good nineteenth-century prints online.

Here is the Chowan River by morning light, treated in a similar manner with the use of straight lines to evoke the geometry of space.

Eggs have played many roles in the history of painting.  Egg white used as a medium, called glair (Scrabble ammo, that), was favored by icon painting.   Robert Gottsegen says that most easel painting prior to the rise of oil paint contains egg yolk.

Both whites and yolks make strong films and can be used apart from, inter-layered with, and mixed with oils.  Andrew Wyeth is perhaps the best known painter in tempera.

I decided to do a patch of foliage first in yolk tempera, then glazed in oil.  Here’s the tempera stage with cremanence white and calcium carbonate.

I’m after a sense of lightweight resilience that weeds so often display.  In terms of imagery that means transparent paint punctuated with opaque places.

In terms of realism, it means making the plants sit proud of the surface of the painting.  I’m hoping the egg will provide a more delicate relief than would a plain grisaille.

I’m putting a Roman numeral after the title because I hope we can do it again next year. Good times and lots of money raised for the Appalachian Wildlife Refuge.  Bye the way, if anyone has 10 acres or so to donate for their wildlife rehab facility, look them up: you can write it off: http://www.appalachianwild.org/donate.html.

From the after-event press release:

Asheville, North Carolina – The inaugural Wild Art event held Saturday August 6, 2016 raised funds and friends to help native wildlife thanks to support from regional artists, Addison Farms Vineyard, dedicated volunteers and the community. Guests enjoyed meeting with artists to learn about their work created at the vineyard and other pieces inspired by nature. Artist Tony Corbitt was set up next to the Animal Ambassador tent during the event and painted the visiting Eastern Screech Owl from the May Wildlife Rehabilitation Center in Banner Elk.

The event was a fundraiser and outreach opportunity for the nonprofit Appalachian Wildlife Refuge working to open a facility to help injured and orphaned wildlife. “We are so thankful to John Mac Kah, Paul Blankinship and all the other artists that attended and donated a portion of the art sales to Appalachian Wild,” shared President and Co-Founder Kimberly Brewster. The nonprofit also held a raffle and had items available for purchase that raised over $1,500.

Nb, the baby robin spotted on the ground by gimlet-eyed fellow Saint of Paint, Dana Irwin. As he was too young to fly, he was returned to his nest instantly.

I asked how common it was for robins to breed this late in the year and was told by a show attendee, “if it required permission, wouldn’t none of us be here.”

Getting a model up off a table top, especially if it’s a living thing, is fun. 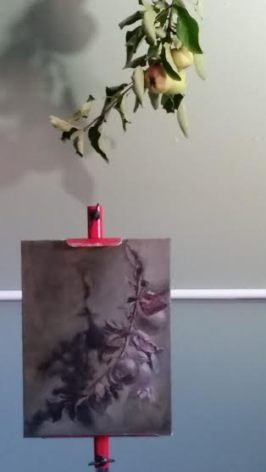 It’s slightly less fun to watch the color fade and the leaves curl as I work.  Makes me grateful for classical training. It takes flexibility to learn what the Victorians meant by “paint in a broad manner” and their grandsons, my teachers by “don’t just paint the object, but paint the air around the object, too.”

I’ve got another bough stuck upside down in a Mason jar of water that may retain some color for tomorrow’s session, but I’m not counting on it.  I mixed up a local color as part of a string from shadow to highlight.  It mostly matched, so that’s what I’m going with tomorrow.

Few things satisfy like making good culture, and propriety forbids crowing about them in public.