First, I corrected the date given for my show in Edenton next month.  It is now to open on Thursday December 4th.  The time remains 5:30pm. The volunteers who run the Chowan Arts Council Gallery didn’t want the show to conflict with the lighting of the town Christmas tree.

Second–and as promised–another look at Bunch’s garage, which greets entrants into the town.  Last year I made the quick sketch of it in China ink, paying attention almost entirely to the shadows cast by the molding.  The building sports a certain posture despite its age, so I returned to the spot, this time to study the texture of the corrugated sheet-metal siding: 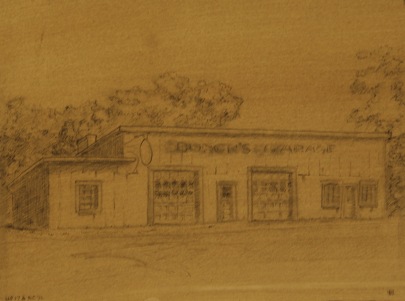 The rhythm of verticals in the building’s fabric makes a strong contrast to the contorted oak forms behind.  I chose a prepared paper to catch the sense of atmosphere that nourishes the trees and ages the building, because, for the time being, the structure’s age contributes to its dignity.  I also abandoned the brush, intending to suggest brittleness with the use of goose and steel pens.

Making a drawing out of a million tiny lines demands an upped tempo and a light touch at once.  It asks both draftsman and viewer to see with two faculties that our historical moment hates: aggression and restraint.